I recently returned to Haiti for the first time since the earthquake. Our vehicle wended it’s way for hours through the choked traffic and widespread rubble of the Port au Prince, north through the bleak and arid landscape, past the filth and wreckage of the roadside communities along Highway 1, and then up a winding rutted rural road to the small but active village of Cazale. 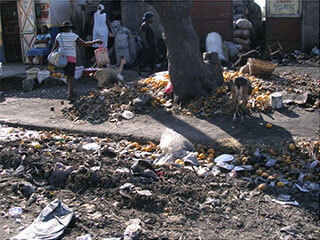 Outside the clinic compound d the location is distinctly Haiti; inside the gates, another world exists. Order, purpose, companionship and healing pervade the place. One has the feeling of coming out of a hurricane into a harbored refuge, a space protected and shielded from all the chaos and ruin around it, and attended by a presence that comforts, eases, puts at bay the forces working to destroy everything around it.

The presence of this clinic and a new Cholera center has been an anchor of Hope for 20 years in this remote part of Haiti. Because of the reputation and trust they have cultivated in the region, often babies are found left on the threshold of the compound by mothers to overwhelmed or uncaring to deliver the children in person. After the child is nursed to health a photograph of the healthy child is posted outside and the word spreads through the Haitian grapevine to the mother who will eventually come by to fetch the child.

These children are brought down from the mountainous highlands by their mothers on trails that sometimes require 10-14 hours of decent just to reach our partners clinic. Often the mothers are as desperately weak and starving as their children but must return to care for several other children. Depending on the severity of the child’s malnutrition, it is almost miraculous what a modest amount of food (specialized dairy products, eggs and therapeutic protein products) can do to restore a child to a normal and healthy state of play and happiness.

Many of the families have never been taught to understand that a hen’s egg has the life giving protein their children need to survive so the chicken goes in the pot for dinner. A training program of introducing the life giving value of eggs has been introduced to help introduce more protein in their diet. Eggs are a relatively inexpensive supplement we can provide to help alleviate much malnutrition. For less than 20 dollars, four children can have an egg a day for a month.

After we were greeted, and given a quick tour of the administration, pharmacy and emergency room we were led to the children’s clinic where the babies too sick to be released are admitted for treatment. At the moment there are 14 children lying on mattresses being attended. The stillness in this rural Haitian, infant care unit took my breath away for a moment. It was a peaceful place, a sacred place, a holy place. Yesterday in this room the last fragile grip a child had on life, loosened almost imperceptibly, while 14 others slept quietly in the vigilant care of their nurses.

The passing of a child, though not rare, is not casual nor is it ever taken for granted in this here. Cell phones are turned off, any unnecessary business stops, as the urgent routines of the focused attention (keeping babies alive) is interrupted in order to prayerfully acknowledge the solemn reality of the individual who just passed into another world. Proper arrangements are made to give honor to observing a proper burial before the whole team fully resumes its vigorous defense of life.

We were briefed on the particulars of several of these tiny babies and the effort to nurse them back from the brink of death with fluids, specialized nutritional products, time, and most importantly, love. I looked around at their silent faces and was humbled by their tiny resting bodies, which didn’t show the struggle to survive, raging in them as fevers and the ravages of malnutrition. I felt curiously captured in their large innocent eyes as I moved slowly across the room. Such beauty, such tenderness such promise hanging in the balance, without guarantees, but not without hope. I gently picked up one little girl, 9 months old and only 15 ounces in weight and held her in my hands as she studied me, too weak to resist or celebrate the attention. Soft, clean, arms and legs as thin as a twig, her neck too weak to hold up her head, I cupped her neck to support her and we looked at one another and my heart melted. I found myself days later remembering her looking in my eyes, wondering, curious, alive.

Time seemed temporarily to be suspended while we were in that room. Each child seemed bigger than life, more important than our busy schedules our agendas and plans. I moved like a bee in a field of flowers, from baby to baby, touching them, holding them, caressed their little hands and feet. A hundred feet away, outside the gates were the streets of Haiti, but here in this room was a garden of fragrant flowers. And then it was time to go, time to go to you (the few people in the whole world who care enough to give) and ask you to help them. It was time to step back out of the suspension of time and pass back through those gates into the noise and strife beyond, in search of support for their life. 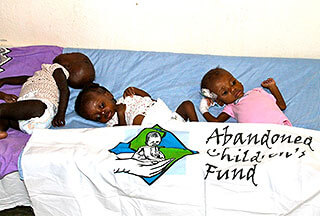